Man down! Is this the end of your email marketing? 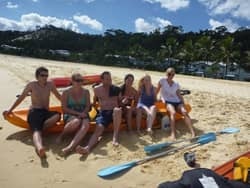 Each year the team at Vision6 goes to Moreton Island for a team building weekend. A part of this weekend is the team activity in which teams must compete to finish a series of challenges.

This year, in the first challenge teams divided into pairs and kayaked around two series of buoys before returning and swapping with the next pair. To add a degree of difficulty each pair of kayakers had to hold on to an egg which had to be delivered to the shore unbroken.

As my team took the lead some of the other (unsporting) teams decided that they would wade out into the water and tip my teams kayak. As two of my team members ran back to the shore after defending the kayak and one team member twisted his ankle. Luckily for us he’d helped us into the lead by defending the kayak and due to the size of our team we were able to keep going – and win!

This incident demonstrates that while everyone in your team is valuable and will have unique set of skills and abilities you can’t afford to leave anyone working on their own, because if you lose them you won’t be winning any races.

To make sure that your eMarketing strategy will survive a ‘man down’ situation here are some simple strategies you can put in place:

1. Talk to each other regularly. Never underestimate the power of a weekly catch-up. It’s easy to concentrate on your own role and forget that you are part of a bigger team.

2. Store passwords and documents somewhere central. Don’t keep things on your desktop as one day someone else may need to access a file when you’re not there.

3. Document important information, plans and processes. Create a central repository where everyone can share their plans and strategies. This could be in an interactive system or (for the less tech savvy) a regularly updated word document.

Most importantly, be realistic. The days of a job for life are long gone the average person only spends three years in each workplace – and then you have to account for marriages, sabbaticals, sick leave and parental leave. At some stage a team member will leave or be unavailable and you don’t want to be left on the beach shouting ‘man down!’

More Regulations & How to Comply

4 Tips for a Successful Omnichannel Workflow

Invite Templates to Get You Partying

To learn more about them or switch them off, view settings.

This website uses cookies so that we can provide you with the best user experience possible. Cookie information is stored in your browser and performs functions such as recognising you when you return to our website and helping our team to understand which sections of the website you find most interesting and useful.

You can adjust all of your cookie settings by navigating the tabs on the left hand side.

Strictly Necessary Cookies should be enabled at all times so that we can save your preferences for cookie settings.

If you disable this cookie, we will not be able to save your preferences. This means that every time you visit this website you will need to enable or disable cookies again.

Please enable Strictly Necessary Cookies first so that we can save your preferences!

This website uses Google Analytics and Attribution to collect information such as the number of visitors to the site, the source of traffic, and the most popular pages.

Please enable Strictly Necessary Cookies first so that we can save your preferences!